Collaboration Face Off: Hanging out with Slack, Spark, Teams and more

Look both ways before crossing the collaboration road 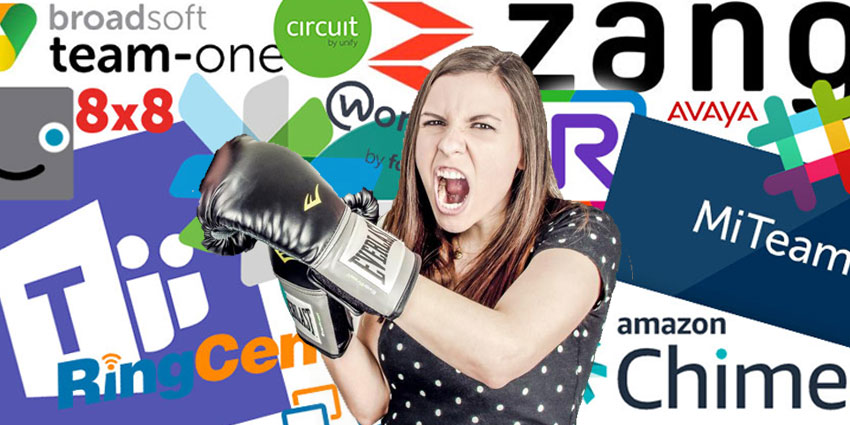 The collaboration market is heating up. Once upon a time, Slack were the only player. Then Microsoft caught wind of their success and the rest is history. If you are familiar with Geoffrey Moore’s “Crossing The Chasm“, then you’ll appreciate how collaboration tools have rapidly leapt from Innovators to Late Majority.

The innovators are buyers that want the newest technology, now. Think about the people queuing up outside the Apple store when a new iPhone is released. The late majority are those that wait until a product is tried, tested, broken, fixed and it’s fourteenth iteration. The former is a product manager’s dream. The latter is a salesperson’s nightmare.

When we reference collaboration tools, we are talking about the likes of Slack, Cisco Spark, and Microsoft Teams. But, we are also talking about everything that surrounds them like Google Drive and SharePoint. You cannot assess the functionality of one product without taking into consideration the full suite.

Our industry is a funny one in that terminology can mean different things to different vendors and customers. Often, you’ll hear people talk about Skype for Business when referencing collaboration. Sometimes, you can have a conversation about Slack and it is called a whole host of things. Persistent chat, workstream messaging, workplace collaboration, team applications, the list goes on.

There is no right or wrong answer here, but it is tough to compare all the players in this space when the space is so loosely defined. Oddly, there is no conclusion to be drawn as to which is the best at the end of this article as each serve a different purpose and service different needs. However, they can be sorted in three categories to make your life easier.

Slack is considered the originator of this type of technology but that doesn’t necessarily mean they are the out and out leader. Slack offers free workspaces for an unlimited time which works great as an internal tool. For external access and little niggly things that boost productivity and reduce clicks, you must start paying for the standard package. For a full meeting experience and to use as your storage facility, you must step up to premium. As the originator, Slack set the bar with a fair pricing model, especially popular with small businesses that don’t need 20GB storage and 15-person virtual meetings.

Microsoft quickly caught onto the success and have turned Teams into an outright competitor across the board. Whilst the roadmap promises everything you can get in Skype for Business beautifully intertwined (that’s the high-level explanation), the current offering is competitive. Teams is free with Office 365 and offers the workspace environment, the meeting environment through either Teams or Skype and the storage through SharePoint and OneDrive.

Cisco Spark is another worthy competitor and I’ve covered the differences between Teams and Spark in detail, previously. As the big brother to Jabber, Spark is equally as capable in the collaboration department with various features such as messaging, meetings, document sharing all functioning to the highest standard. However, with so many similar tools in the chest, Cisco are perhaps in danger of creating confusion with their existing customers.

Neither Amazon nor Facebook are traditionally players in the business communications market, but these are serious names that we see sneaking in through the door. Workplace by Facebook has been adopted by the likes of Starbucks and utilises the same functionality as Slack and Teams but has the bonus of looking extremely like Facebook that you use at home, on the train and yes, probably at work anyway.

Amazon Chime has seemingly been sitting on the sidelines waiting for something to happen, but you could argue that Amazon have also been busy taking over the world. It’s not just Jeremy Clarkson that is doing his shopping via drones.

The Chime platform offers cloud-based voice, video, and chat with crystal-clear audio, and integration with a wide range of operating systems, including iOS, MacOS, Windows, and Android.

You’d think if Amazon decided to push, then the brand name combined with the enterprise grade functionality would be a firm favourite.

RingCentral position Glip as giving you 30% of your time back each day, which is not to be sniffed at. Originating as a soft phone, Glip has now evolved to give users file sharing access, video chats, instant messaging and task management as standard.

Unify Circuit is an alternative as an open standards Unified Comms solution. Fans of building your own solution and having complete control will favour Circuit with it’s eat as much as you like approach and open APIs for near unlimited integration.

The more traditional vendors like Mitel and Avaya with MiTeam and Zang Spaces have made steps into this technology space too. They’d be foolish not to. According to Markets and Markets, the enterprise collaboration market will be worth over $49bn by 2021.

Avaya Zang Spaces is designed to work with Zang Office and Zang Cloud to really Avaya-ify your business. If you’ve already invested in Avaya, then this makes complete sense for business and user alike.

Mitel have such a history in the telecoms industry and a huge client base to build upon that the success of MiTeam was inevitable. Features such as video presentations, whiteboards and streams come as standard.

Most impressively, MiTeam also has the unique and time saving ability to auto archive. UC Today has completed a full review of MiTeam and walks through the best bits and explains how it removes the mind numbing sifting through emails to find that one important document.

There wasn’t supposed to be a conclusion drawn here and so there won’t be, but it would be great to hear your experiences with any of these collaboration platforms. Or even one that hasn’t been mentioned like Google Meet or HipChat? Leave a comment below and I’ll get back to you.

No mention of Jive, Lithium, Atlassian (among others)? Enterprise-class collaboration tools and platforms have been around for over a decade, and forward-thinking companies have adopted them and worked hard to develop use cases for them that deliver business value. It has taken mainstream enterprises this long to realize just how powerful these types of applications can be. Slack came up with a simple UI and a freemium business model, but they are hardly the first or functionally best choice. Ditto for MS Teams and Cisco Spark.

What system works for one company may not be as effective for another. A long list of features always looks good but a UC system that is tailor-fitted to the company’s needs and its operations is key!

On that note, the service/experience they provide alongside such as security, reliability, qos etc can also make a difference to sway a customer!

Really interesting and couldn’t agree more that it is difficult, nigh on impossible, to compare platforms like for like. One of the themes from EC 2018 was that these collaboration platforms seem to be the dominant force in the market and will possibly agglomerate the more traditional UC tools. Fascinating to see what impact Amazon, Facebook and Whatsapp will have in the future, maybe the concerns over data security (especially in light of recent events) will hold them back from capturing the professional market.

Collaboration software is definitely on the rise, there are obvious advantages to it – Slack sums it up in its name “Searchable Log of All Communication and Knowledge”.

There are, however, many options but it seems likely that MS teams will become the front runner as so many people already have it as part of Office (whether they want it or not).

I wonder if there will be acquisitions in this field too…who really wants to win this competition for users?

Who offers the best experience?

So many choices now available for collaboration in the workplace. All we need now is some kind of federation between them and email might be on it’s way out 🙂