Innovative Insights and Speech Analytics with SpeechIQ at CCW

We catch up with SpeechIQ at Customer Contact Week 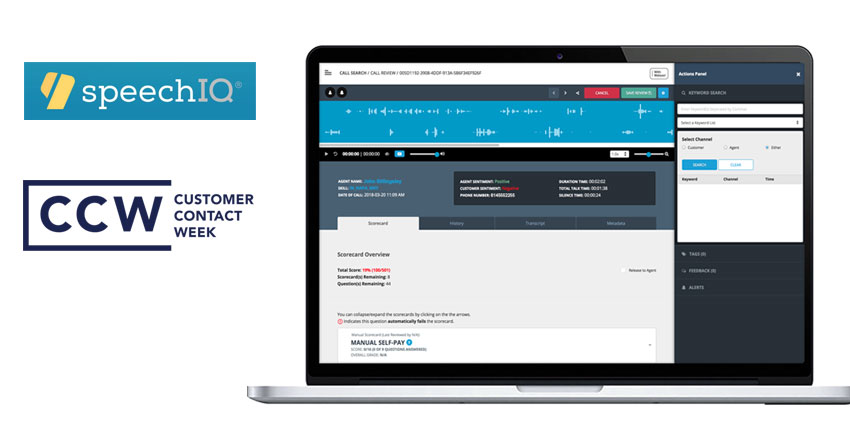 I was lucky enough to be one of the thousands of people attending the Customer Contact Week event in Las Vegas this year. This incredible event, which has been running for almost 20 years now, offers insights into some of the most innovative and engaging forms of technology available on the market for those with interest in improving the customer service journey.

Currently, CCW is the largest customer contact event series in the world, running three times per year in Austin, Las Vegas, and New Orleans. During my time at the Vegas event, I caught up with Nick Bandy, the CEO of SpeechIQ, which is part the iQVentures portfolio to talk about the power of speech analytics in the call centre.

Tell Us About Yourself and SpeechIQ

Nick Bandy, the CEO of SpeechIQ

Nick has spent the majority of his career in the digital marketing and advertising space, so he knows a thing or two about dealing with customers. When he sold his digital marketing business, he spent some time looking for new technologies and interesting evolutions that might offer a good basis on which to form a new company.

“What I found particularly fascinating was all the data we have in the marketing space. There’s lots of great information coming from brick and mortar stores, as well as the online marketing world. However, there’s a lot of information out there in the contact centre that often goes untapped. I thought it would be a great idea to use technology to find that information and use it to drive better experiences.”

The SpeechIQ technology was originally built by one of Nick’s colleagues for a specific customer. However, as the group began to look at the possibilities of the tech, which started as a simple speech analytics platform, they realised it’s potential.

“Since then we’ve been building on it, adding more quality management, more speech analytics, and more opportunities with reporting to make it a scalable platform for any customer.”

What Makes SpeechIQ so Great for the Contact Centre?

Bandy told me that speech analytics isn’t exactly a new concept – in fact, it’s been around for possibly fifteen or sixteen years already. The difference is that AI is helping people to achieve new things in this space.

“People are beginning to discover that they need to automate a lot of the things that they’ve done manually up to now. We’re seeing a really upslope in analytics in the call centre, and as the science of AI becomes more reliable, people are more willing to explore it.”

Nick noted that most of the companies attempting to analyse their call centre data manually can only analyse up to about 5% of the information they’re taking in. However, with a solution like SpeechIQ, they can look at anywhere up to 100% of their calls – making the ROI on this system particularly huge.

“If you automate all these thousands or hundreds of thousands of calls with our technology, you’re going from a maximum of maybe 5% to potentially 100%. If we can create questions driven by keywords and phrases etc., we can capture more on calls and give people a truly immersive insight into their customer data.

How Do You Personally Define AI?

As I’ve been exploring the Customer Contact Centre week event, I’ve found a lot of people talking about the nature of AI. It seems that there’s something of a debate over when something should stop being called “computer programming” and start being known as AI. I asked Nick how he responds to this idea. 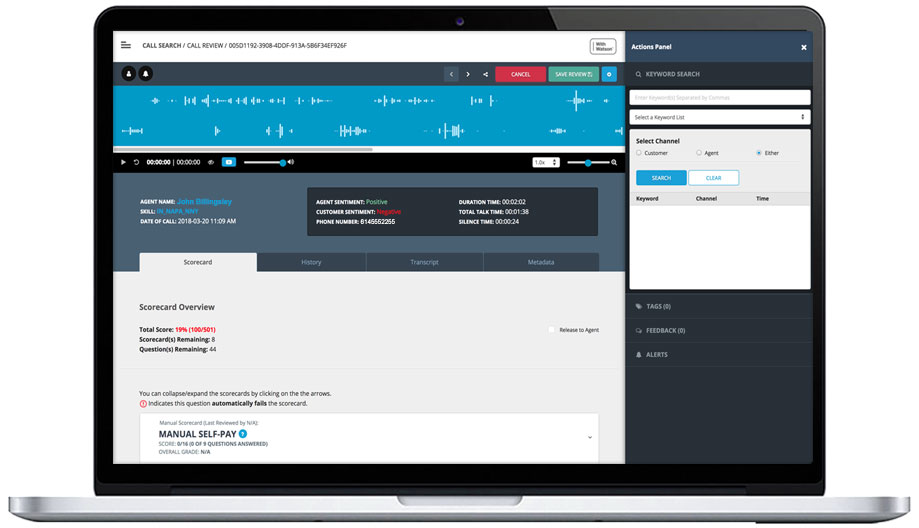 “I think there’s a wide spectrum in how people are using artificial intelligence today. Some people think that it’s simply about replacing a human being with a computer program.”

“Other people say that it’s all about true machine learning, and a computer getting smarter every time it looks at a call. I think it’s something in the middle of that, starting with being able to identify what’s going on in customer service data.”

SpeechIQ is currently using AI in their systems, but they’re also looking at what they can do to expand their existing strategies and get more out of the machine learning conversation so that they can take it even further.

What Have you Seen at CCW so Far?

Though it was still the first day of the CCW event when I sat down with Nick, I was interested to hear what he had seen at the event, and what customers seemed to be asking for. He told me that the main thing people were talking about was how they could understand why people were calling their contact centres, and what they could do to reduce the number of calls coming through, and the amount of time agents spent on calls.

“Managing calls is expensive, so if a company can reduce the amount of time spent on a call, the return on investment can be in the millions. If you can find out what your customers want and what they’re doing, it’s much easier to streamline their experience. I think that’s what we’re doing for companies now, and what we’re demonstrating with SpeechIQ.”

What Does the Road Ahead Look Like for SpeechIQ?

Nick told me that SpeechIQ is incredibly excited about the product that they have to offer their customers.

“We think it’s really competitive. It’s cost-efficient, accurate, secure, easy to use, and simple to implement. For us, the road forward is looking at how we can continue to scale this. We’ve just launched a new generation of our platform that’s been built up for extra scalability and reliability.”

Going forward, SpeechIQ will be continuing to add new features as people demand more from their contact centre analytics solutions. SpeechIQ sells both direct and through partners, to customers with as few as 6 agents, to businesses with agents in the thousands.