We review the most popular Avaya-related articles in 2019 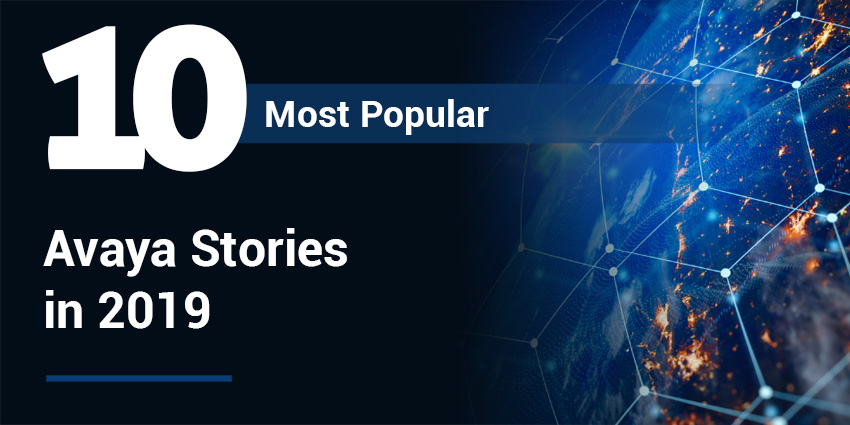 Contact centre and UC giant, Avaya, made headlines this year for all the right reasons. From a possible acquisition to exciting new partnerships, and of course, several meaningful updates, Avaya kept our readers hooked across all of 2019. Here are the top stories you might have missed:

Avaya Engage is a much-awaited user conference and 2019’s edition didn’t disappoint. The company announced an overhaul to its portfolio, launching Avaya Intelligent Xperiences or Avaya IX. This will include eight discrete solution components as well as Avaya’s hosting environment. In an interesting addition to the news, Avaya mentioned that AI plays a key role in its new portfolio – we delve deeper and share more announcements from Avaya in this flagship event.

Good news for small businesses! Avaya’s new multi-tenant UCaaS platform is ready to address the SMB market. Companies with less than 50 seats can sign up for their own Avaya solution, without needing a distributor or a systems integrator. This has major implications for non-traditional resellers as well. For this article we spoke to, Roberto Schmidl, VP Germany Small and Medium Business Unit, Avaya Germany, to get you the inside story.

Enterprise Connect 2019 brought us a slew of exciting updates, including Avaya’s intention to leverage Google’s AI capabilities. Avaya is recognized as a contact centre giant – so it was only a matter of time before it teamed up with Google Cloud for its Content Centre AI tools. We spoke to Paul Lang, Head of Contact Centre Product Marketing at Avaya, during our time at Enterprise Connect. Read on to know about the three core areas transformed by this new partnership, right from the horse’s mouth.

Mitel Make a Bid for Avaya

The buzz on the grapevine is this: the Wall Street Journal has reported that Mitel is making a bid to acquire its competitor, Avaya. And it’s not the first one to do so. Following in the heels of Searchlight Capital Partners and Apollo Global Management (unconfirmed by official sources) Mitel is eager to scope up Avaya’s formidable capabilities. WSJ said that Mitel has valued Avaya at $2+ billion, but we have mixed feelings about this deal. Here’s why.

Right off the bat, this sounds like a match made in heaven in UC heaven. Google Cloud is a near-ubiquitous platform for businesses across the globe, and Avaya’s office communication technology will be a valuable addition to its capabilities. The partnership fuels a new strategy titled Google Cloud Powered by Avaya. Here’s what this means for existing Google and Avaya partners.

As Avaya enters a new bend on its growth curve, we were curious to know what the company has in store as it strengthens its cloud capabilities. And who better to tell us than Dan Cholerton and Carl Hardie, Directors of Avaya cloud partner, Formation Tech? They traced Avaya’s evolution from its on-premise origins to the options ahead, for inking cloud partnerships. Surprisingly, the journey has been more seamless than we expected.

2019 was a tumultuous year for Avaya, to say the least. It witnessed steady growth even as it recovered from its Chapter 11 bankruptcy in 2017. Now, with Mitel making a move to acquire Avaya, the company could be headed for a new home. What does this mean for Avaya’s massive workforce and highly popular product lineup? UC Today's Rob Scott weighs in on this developing story.

Talent from the world’s top UC companies is always in demand. That’s why it’s no surprise that Avaya’s UK MD, Ioan MacRae, is moving to Maintel as its new CEO. Ioan has worked with Maintel for several years, making this an intelligent decision. However, we can’t ignore that this is a major loss for Avaya as it navigates a difficult period, recovering from 2017’s body-blow when it filed for bankruptcy.

Despite ongoing chatter around Avaya’s no so bullish future, the company came out with a thrilling new partnership in October of last year. This time it is joining hands with cloud communications expert, RingCentral, to introduce a brand new product called Avaya Cloud Office by RingCentral. This is definitely good news for the company’s 5 million contact centre customers spread across 180 countries.

In this episode of interviewing the leaders, we spoke to Avaya’s CEO Jim Chirico, on the company’s recent alliance with RingCentral. Against a backdrop of GITEX 2019 in Dubai, Jim told us why the move was a real homerun for Avaya, and how events like GITEX play an important role in Avaya’s business roadmap. Listen in to this revealing conversation, to know all about the nuts and bolts of the partnership.