How to UC in the Snow 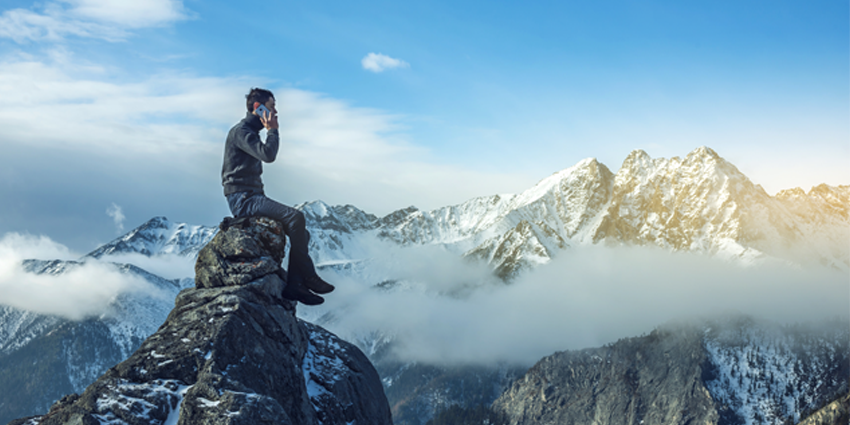 It snowed last week. This means everybody in our industry was promoting their Unified Comms / Work from Home / Cloud / Remote Working / Buzz Word / Buzz Word on LinkedIn, so my feed has been flooded (or should that be snowed) with this type of thing.

I’ve always been cautious as to which companies I work for and that their products are best of breed rather than any old tat. I now work for an independent consultancy. So, rather than this being a post to showcase my shiny buzz word product, I’ll share my story of this week.

Sunday night, I took the train from Dorchester to Stockport – via Bristol. There is no WiFi on Great Western trains and the route didn’t involve much 3G, so I read my book (A Different Kind of Life – it’s the autobiography of the late wife of Frank Williams and you simply must read it).

Bristol to Stockport had that required paying for. My company permits me to claim this back, so I did some work on the train via the Microsoft suite. I used Word and Excel after opening the latest versions saved by my colleagues on SharePoint. I made comments and chatted on the fly using Teams.

Monday morning, it snowed a little but nothing to write home about. My colleagues got the train up that morning so met me and we had a Skype Meeting in the cafe of my hotel with one of our clients, after connecting to their WiFi.

Arriving at destination for numerous meetings, the guest WiFi wasn’t up to scratch so we resorted to 4G tethering for general use. The driven down price of mobile data has made this a solid backup rather than a last resort. I made my meetings notes in the OneNote tab built into Teams so that the rest of my “team” could view and amend as the meeting progressed.

After spending the night in Harrogate, we started the morning in Ripon and the guest WiFi was up to it today. Various Cisco conferencing endpoints were called into action as the snow had it and lots of members of staff due to attend the meeting couldn’t make it into the office.

Come the afternoon and the time of the big meeting, we utilised the impressive Cisco telepresence solution to see both the dialled in members on video on one screen and the presentation we were sharing on the other. The 70-inch screen made easy viewing even for the members at the back of the room. With no latency issues, nobody pottering around and various mute controls in order, the meeting went swimmingly.

After getting the train back and utilising the rather good Virgin WiFi on their trains for various Outlook and Teams work – it would be alarming if it was provided by someone else – I woke up in London on Wednesday.

The hotel WiFi was not great but my “go to” WiFi hotspot, Caffe Nero, was just around the corner. However, due to the snowfall and freezing temperatures, they had no internet. Not only did I have to tether my 4G again, but I didn’t get a stamp on my app!

I had a call booked for 11am and didn’t fully trust the 4G so headed to Marks and Spencer which is notorious for having empty cafes in the deep snow. I had the entire WiFi to myself and my Google Hangout went ahead just fine. I have been a doubter of Google Hangouts for a while as I am not a frequent G Suite user. However, with little effort, I created a Google account and the experience is much better.

Refreshingly, I woke up at home in Dorchester on Thursday. It it had snowed a little but there was no cause for concern. I went about my usual routine in my garden office with the occasional Skype meeting.

I now fully understand what people mean by “a lot of snow”. I had a Skype meeting booked for 6am as my boss is currently in Sydney but as I crept down the stairs – so as not to wake anybody – I was greeted by darkness. I quickly emailed him and explained we had a power cut and we rescheduled as I went about doing everything I could to get back to work. Okay, I went back to sleep.

Come 9am and we were still without power (and WiFi). I set up my 4G next to the log fire in the living room – the snow was too deep to commute to the garden office – and started as much work as my battery life would permit.

Coincidentally, the pub over the road opened at 12. This is roughly the exact time that my laptop lost all power. So, in search of power, I relocated. Alas, the pub had no power and no WiFi.

However, this did not mean I could not work the rest of the day. With the aid of a portable charger, my mobile survived and I hosted two Skype meetings. The only slight restriction is that I could not present the documents I have saved but if I’d have fully prepared for this then that could have been avoided.

Moral of the story

I’m not sure what the moral of the story is here but you can certainly see the argument for promoting cloud and remote working enabling tools when this sort of thing happens. I was fully prepped for such a scenario but lots of businesses in the UK are not.

Millions of pounds will have been lost in productivity and output alone, let alone transactions that couldn’t go through due to staff or system failures.

UC&C is an industry that is of real interest to me but it’s days (or weeks) like this that it should be on every businesses to do list.