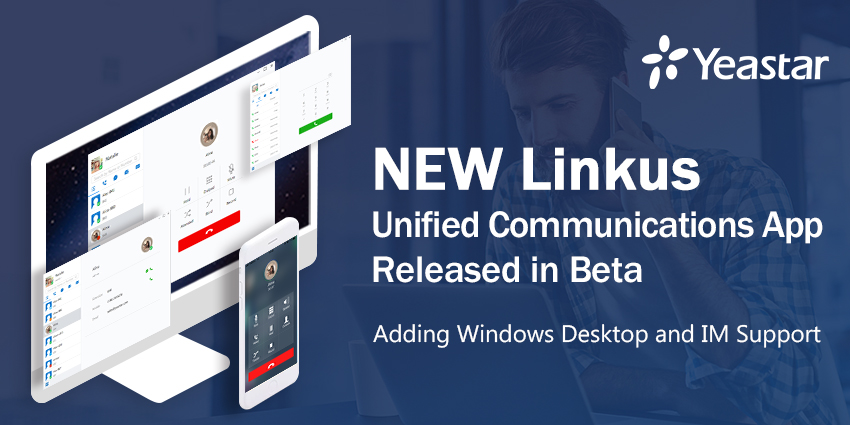 Yeastar, a leading manufacturer of VoIP PBX systems and VoIP Gateways, has announced the beta release of its new Linkus Unified Communications Application. Built on the success of Linkus Mobile Client which has exceeded 30,000 downloads, the new Linkus adds Windows desktop and IM support along with a suite of advanced call handling features, providing powerful UC functions from the convenience of Windows PC and mobile devices.

Yeastar launched its first cloud PBX offering, Yeastar Cloud PBX, earlier this year. Now with the release of the new Linkus for Desktop and Linkus for Mobile, Yeastar is taking its UC offering a step further, opening up more reseller sales opportunities and putting the power of UC into the hands of more modern mobile workers.

Key Features and Benefits of Linkus:

“The new Linkus sets a milestone for Yeastar in our way heading to Unified Communications,” observed Alan Shen, CEO of Yeastar

“We are just getting started. Our vision is to continually innovate and fully support our partners every step of the way. Thanks to cost reduction and productivity enhancement brought by the new Linkus, Yeastar’s complete UC portfolio is off to a flying start.”

The new Linkus is available in three beta versions now:

About Yeastar
Yeastar specialises in the design and development of innovative telecommunications equipment, including VoIP PBX systems and VoIP gateways for the SMB. Founded in 2006, Yeastar has established itself as a global leader in the telecommunications industry with a global partner network and over 100,000 customers worldwide. Yeastar products have been consistently recognised in the industry for their high performance and innovation.