Review all of the news from the 6th annual KAZOOcon conference 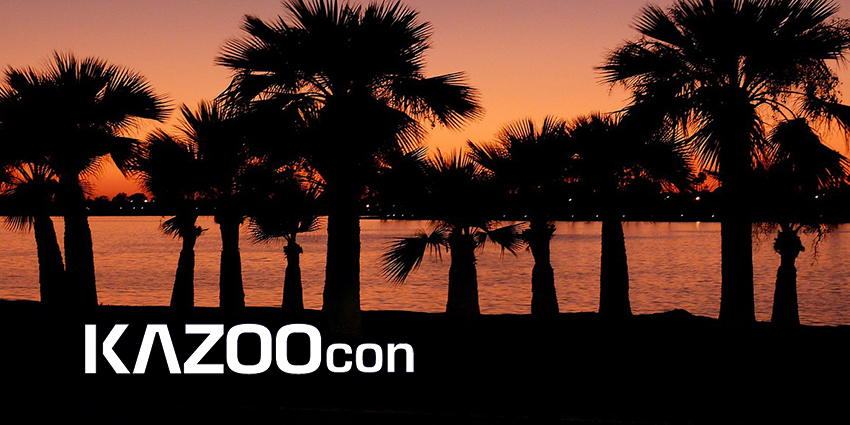 This week in San Diego, California, UC Today has been attending KAZOOcon 2019 to bring you all the latest news and updates for the KAZOO platform from 2600Hz. KAZOO is 2600Hz’s open source software platform offering a full suite of communication and collaboration applications that equip developers and engineers with the ability to seamlessly deploy services utilising KAZOO’s APIs.

2019’s conference, hosted at the Bahia Hotel Resort, is the 6th annual iteration of the conference and gathered KAZOO customers, industry thought leaders, the developer community and communication specialists to discuss and examine the next generation of technologies capable of transforming the communications landscape.

During this year’s show UC Today sat down with 2600Hz’s CEO & Co-Founder, Darren Schreiber, to run through all of the news and discuss the ever changing communications landscape.

“KAZOOcon gives us that element of human connection.”

“It can be easy to get lost in an interface, but our partners and our resellers are selling to real people and real businesses that have problems to solve and being able to connect with them in person gives us a greater understanding of what we need to offer.”

News and Updates Galore for KAZOO 5.0

2600Hz took the opportunity, and used this year’s KAZOOcon, to announce a huge amount of new features and applications that will strengthen its provision to the global service provider community. In contrast to previous years the new applications discussed at this year’s event are already deployed in BETA or production environments, clearly demonstrating 2600Hz’s commitment to real world usage rather than hypothetical developments.

Before we get started on the host of new applications that have been announced there were also a number of administrative updates that add crucial features to the KAZOO platform. The 2600Hz team revealed that a new support tool will be made available as well as the introduction of a professional services team to assist the service provider community with more complex and unusual deployments. In addition there were also announcements of several new applications, in BETA, such as a Service Plan Editor, Invoice Generator and a Tax and Remittance calculation app.

Possibly the most exciting announcement was the unveiling of the new App Exchange. 2600Hz has an incredibly diverse and talented developer community engaged with its platforms and leveraging that for the mutual benefit of all involved makes huge sense. The 2600Hz App Exchange will build on the community of third-party developers who want to build and publish applications for the KAZOO platform.

“There are a lot of people that are really creative in our developer community and with the new App Exchange we can help with some of the mundane logistics, and structure, while they can concentrate on the really cool innovations.”

Utilising KAZOO’s APIs will allow developers the chance to innovate and build new applications that can cater for any specific aspect of the communications market. The potential for developers and service providers to use their own market expertise to create applications, offers them a critical ability to differentiate their own offerings to customers in an increasingly crowded and competitive market landscape.

The development didn’t stop there with 2600Hz unveiling a raft of new features and applications aimed at end users. A new User Portal is now available and both desktop and mobile applications have now been released. The mobile application is not merely a softphone, utilising SIP, but a fully-fledged mobile client offering users the ability to seamlessly use their mobile devices for business telephony. More mobile app features are in development too including; ‘do not disturb’, presence monitoring and business SMS/MMS. 2600Hz have also been targeting the contact centre space with its new Call Center Pro application. Using a new UI it will enable more functionality than previously available offering users the possibilities of call handling, queue management and real-time activity feedback with enhanced analytics and dashboard features. There is also a full list of applications now in development pending future release including; Inbound Screen Pops, Screen Share capability, a full Softphone with Video, Video Conferencing and Voicemail transcription.

2600Hz also has big plans for KAZOO’s global expansion. Building on its existing success, 2600Hz saw 80% revenue growth in 2018, there are now plans for geographical exploration into new territories. The KAZOO platform itself is already available globally and utilises a multitenancy infrastructure to offer full geo-redundancy and failover. Now 2600Hz has plans for expansion of its own go-to-market capabilities and global presence.

KAZOO will now be targeting so far unexplored VoIP markets within the EU, Australia and New Zealand. Expansion into new territories comes with inherent challenges and these are recognised by 2600Hz. Obstacles surrounding differing regulatory requirements, localisation and culture all have to be taken into account. KAZOO will address these with extensive localisation packages, localised dialing and dial plans, auto provisioning and distinct regional APIs.

2600Hz have also partnered with cloud infrastructure supplier SoftLayer, who are owned by IBM, to provide increased global availability. With datacentres in London, Milan, Auckland, Sydney, Melbourne, Milan and Oslo KAZOO will now have suitable infrastructure across these cities in addition to its existing locations.

Integration was also another key focus during this year’s conference. 2600Hz announced a host of new integration partnerships in various areas including CRM, collaboration and mobility services. In the CRM space KAZOO will soon offer compatibility with leading software providers such as Salesforce, HubSpot and SugarCRM. These integrations will allow service providers to further converge services for the benefit of their end customers. When it comes to collaboration 2600Hz have selected the godfather of synchronise chat apps as it will now offer Slack integration. Adding another string to the bow of its partners the latest announcement revealed that providers will be able to connect Slack and KAZOO to provide Quick Call functionality alongside a host of other benefits that will be announced shortly.

Arguably the biggest piece of partnership news was the announcement that KAZOO will now be able to offer an additional set of carrier services, in addition to those already provided by Sprint, by partnering with T-Mobile Business. T-Mobile Business has been actively targeting the professional sector and the new partnership with KAZOO appears to offer great mutual benefit to both organisations.

“T-Mobile have already been disruptive in the consumer world and now they are aiming to do the same in the business world.”

“They are nimble enough to test us out and its hugely positive for us to try and prove that, with our help, a wireless carrier can provide your entire business networking solution for data, voice and messaging.”

KAZOOcon 2019 certainly provided all of those in attendance with a glimpse into the potential future of unified communications. With a highly engaged and technical audience, 2600Hz were able to offer greater insight into areas that other providers might not have the capability, or even inclination to. Encouraging its partners to relish competition and leverage innovation to stand out in the market is a hugely admirable goal and judging by its own pace of feature releases and updates the future certainly does look promising for everyone involved. Its goal of disrupting the existing status quo in the communication’s market is becoming more and more of a reality.